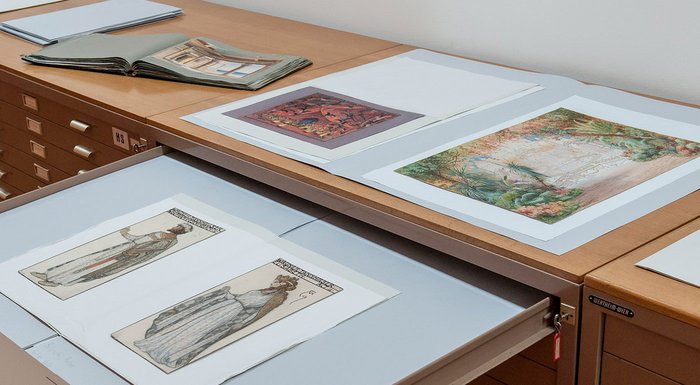 The collection of drawings is one of the most significant theatre-themed specialized collections in the world and encompasses more than 100,000 individual sheets. Its origins can be traced back to the imperial collection. The most important groups include the stage, costume and festivity decoration designs by Lodovico Ottavio Burnacini, the dominant personality of Leopoldine opera during the Viennese high baroque.

The highlights of the collection also include the designs of the most important families of stage designers and theatre architects of the late baroque era: Galli Bibiena, the rococo costume drawings by Daniele A. Bertoli and, last but not least, the extensive legacies of Alfred Roller and Caspar Neher, who had a major influence on the field of scenery and costumes in the 20th century. Other strengths of this collection include coloured drawings by Edward Gordon Craig and designs from the Russian avant-garde.

Ever since the nascence of theatre, the respective designs of the performance space, of the costuming and of the makeup have been determining elements of the scenic. Since the Renaissance, it has been a central task of theatre to allow a fictitious happening to be experienced in reality. In order to achieve this goal, buildings were put up that were endowed with a wide range of technical features. The history of stage design, therefore, is a process of creating ever-stronger illusions in the stage space on up to the complete formulation of the proscenium during the 19th century, the darkening of the audience space and that space’s final separation from the stage—as in the theatre of Richard Wagner. Only in the 20th century was the attempt made to break the illusion and create a space consisting of meaning.

The collection of drawings at the Theatermuseum relates mainly to stage and costume designs, portraits of actors and actresses, and theatre architecture. These generally include watercolour, pencil and quill pen sketches, as well as gouaches. Stage and costume designs were usually done as models for use by the various workshops. Only on the stage does their artistic intent actually unfold, in the interplay of space, movement, light and shadow.

The stage scenery designs depict the associated space in its individual details, often including the protagonists. Some designs, however, were made after the fact in order to document the scenery and—particularly during the 19th century—to serve as guides for repeat performances.