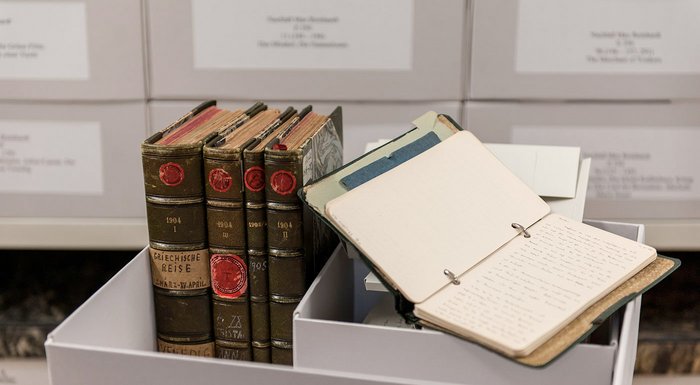 The Autograph Collection contains originals by Ludwig van Beethoven, Johann Wolfgang von Goethe, Fanny Elssler, Richard Wagner, Richard Strauss, Gustav Mahler and others. The only autograph of Franz Kafka for one of his works present in Austria—a page from his novel Amerika—is part of the manuscript collection which Stefan Zweig donated to the Theatre Collection before he fled the country in 1938.

The large collection of legacies at the Theatermuseum contains materials of the most diverse nature: in addition to autographs, manuscripts, newspaper clippings, photos, sketches, stage and costume designs, the collection also includes theatre costumes and private clothing, pictures, furniture, coins and various memorabilia that are distributed among the special collections of the institution according to museological criteria.

The Collection of Autographs and Legacies is based on the holdings of the former Theatre Collection of the Austrian National Library. The cornerstone is formed by what was then the largest existing collection of theatre-related items, that of Hugo Thimig; his collection was purchased in 1922. Hugo Thimig (1854–1944), imperial court actor, stage director and director of the Burgtheater, was an impassioned collector of objects having to do with theatre, and within forty years he had collected around 120,000 objects including 20,000 printed publications, 40,000 autographs and 60,000 illustrations.

Little by little, these holdings were expanded by important legacies of outstanding artistic personalities from the fields spoken, musical and puppet theatre. Figures represented include the poet and publicist Hermann Bahr (1863–1934) and his wife, the celebrated opera singer Anna Bahr-Mildenburg (1872–1947), the composer, military Kapellmeister and Court Ball Music Director Carl Michael Ziehrer (1843–1922), imperial court actor Josef Kainz (1858–1910), actor and theatre director Hubert Marischka (1882–1959), stage designer and costume maker Caspar Neher (1897–1962), the actor, director and theatre director Max Reinhardt (1873–1943), visual artist and puppetmaster Richard Teschner (1879–1948) and Burgtheater actor Albin Skoda (1909–1961). One of the most important parts of the collection, the legacy of stage and costume designer Alfred Roller (1864–1935), was donated for the opening exhibition of the Theatermuseum at the newly renovated Palais Lobkowitz in 1991.

Among the museum’s autographs, some of which come from various legacies and some of which were purchased individually, are originals of Ludwig van Beethoven, Johann Wolfgang von Goethe, Fanny Elssler, Richard Wagner, Richard Strauss, Gustav Mahler, etc. The only work autograph by Franz Kafka (1883–1924) located in Austria—a page from his novel Amerika—is part of the manuscript collection that, before fleeing the country, Stefan Zweig (1881–1941) donated to the then-director of the Theatre Collection, Joseph Gregor (1888–1960).

Currently our inventory contains autographs and both complete and fragmented bequests; collections on Austrian Theatre predominantly from the 19th and 20th century. Access and use by prior appointment only. For further information please contact Dr. Christiane Mühlegger-Henhapel.