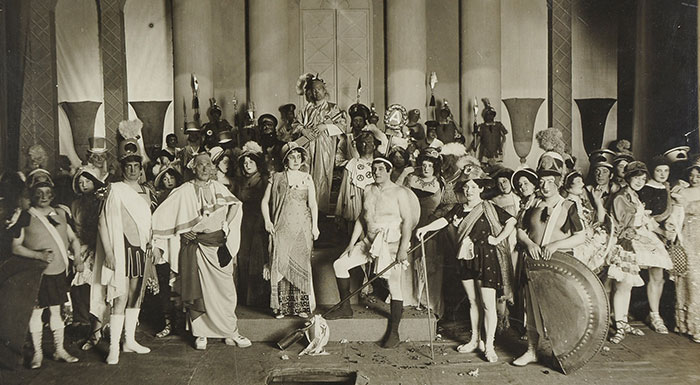 The Photographic Collection of the Theatermuseum, with holdings that far exceed 700,000 items, is the most important and largest photo collection dealing with the history of theatre in Austria. Scene and portrait shots document the performing arts—both in Austria and abroad—back to the mid-19th century. The earliest photographs are portraits from the 1840s, and a bit later these were joined by the first re-enactments of dramatic scenes done in the studio.

The highlights of this collection include photographic documentation of European stage productions such as those of Max Reinhardt’s Berliner Bühnen, remarkable pictorial witnesses to the Russian avant-garde theatre of the 1920s, the photo-historical documentation of all Salzburg Festival stage productions, and the collection on cinema prior to the year 1943, comprising around 65,000 photos.

A small selection of these comprehensive holdings can be viewed in the “Fotolabor” (Photo Lab) in the display collection of the Theatermuseum.

The ephemeral nature of theatrical events has always nurtured the desire to capture great moments for posterity. Up into the 19th century, it was above all the products of printed graphics that filled this need. From the second half of the 19th century onward, the new medium of photography began to assume the task. For a long time, it was mostly portraits and/or re-enacted stage scenes that were photographed.

The oldest photos in the Photography Collection of the Theatermuseum are dated 1846, and therefore from the very beginning of the age of photography, which was invented in 1839. These early salt prints were made by photographer Georg Koberwein, who took portraits of his mother, Burgtheater actress Auguste Koberwein, alongside other family members.

With the help of new technological advances, Hans Böhm finally succeeded in taking the first scene shots directly from the stage in 1924. Only at that point did it really become possible to capture a theatre event the moment it occurred. His photographs of stage productions by Max Reinhardt are first and foremost of documentary significance.

A significant basis for the museum's collection was formed by the private collection of court actor and Burgtheater director Hugo Thimig (1854–1944). Thimig himself was fond of photographic experimentation, and he created numerous humorous self-portraits as well as pictures of his children Hans, Hermann and Helene, who were likewise to become famous stage and screen actors later on.

Further photographic archives were purchased by Joseph Gregor (1888–1960), founder of the “Theatre Collection of the Austrian National Library”, including for example the collection of Konstantin Danhelovsky, privy councillor at the Austrian Court of Audit. We have this “head hunter" to thank for over 50,000 portraits from high society, theatre and culture that have thus been preserved for posterity. Following his death in 1939, this valuable collection went to the National Library, and today the theatre-related part is kept at the Theatermuseum.

During the 1970s, the Theatre Museum was able to purchase the entire life’s work of theatre photographer Bruno Völkel who, alongside productions of the Federal Theatres, also photographed the stage productions of Vienna’s minor stages and basement theatres during the post-war years. In 2004, the collection acquired the oeuvre of Josef Palffy. With their pictures, these two documentary photographers alone covered over 60 years of Austrian theatre history.

Furthermore, generous gifts and frequent purchases continue to expand the photo collection of the Theatermuseum. These additions include valuable originals from the studios of Madame d’Ora, Trude Fleischmann and Rudolf Koppitz, as well as the photo inventories of Atelier Dietrich, of Foto Ellinger in Salzburg and of Franz Xaver Setzer.