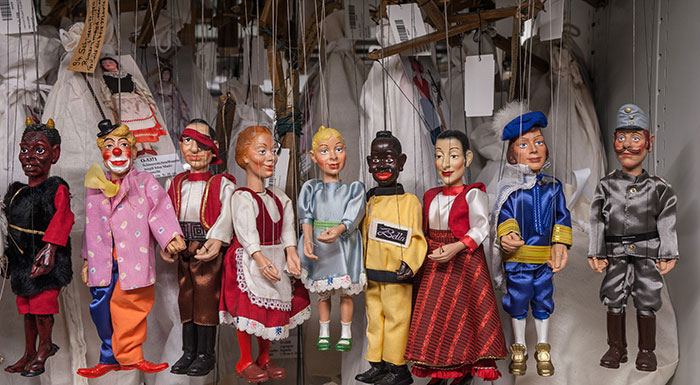 Heinrich Rudolf Ruprecht (1896–1960) ran one of the last puppet theatres in the outer districts of Vienna. His legacy contains are important relics from the age-old Viennese marionette theatre tradition. In the area of shadow puppetry, the collection includes Javanese wayang kulit figures as well as Viennese figures made of tin.

The legendary Figurenspiegel (Magic Mirror) by Richard Teschner enjoys an iconic status in the puppetry field. With his rod-puppets, plays, stagecraft and mechanical theatre music, the oeuvre of Richard Teschner (1879–1948) can be described as a complex, integrated theatrical artwork under the influence of the Viennese Secessionist and Art Deco movements. The Theatermuseum stages frequent performances of plays by Teschner.

Puppets on wire and strings populate the collection of Heinrich Rudolf Ruprecht (1896–1960). His marionette theatre on Rosensteingasse was one of the last of Vienna’s typical, outer-district puppet theatres. Ruprecht purchased several old puppet ensembles and expanded this basic stock according to his immediate needs. His legacy includes important relics from the age-old Viennese marionette theatre tradition. The collection contains items known to have belonged to the puppeteers Florian Bahonek and Karl Fränkl, as well. Ruprecht was also active in the Punch-and-Judy-like Kasperltheater genre. After his final performance, he is said to have laid his Kasperl sock puppet (Kasperl being a Punch-like figure) to rest in the glass coffin of the Snow White marionette.

In the field of shadow puppetry, the Theatermuseum owns several Javanese wayang kulit figures as well as Viennese figures made of tin in the style of the Chat Noir in Paris around 1900, represented particularly by the works by Viennese puppet maker Leopold Hiesinger from the 1950s. Hiesinger devised an unmistakable style of head that he made using papier mâché. Numerous puppet theatres played using “Hiesinger heads”, and puppet retailers sold smaller versions of such puppets for children.

In techniques for rod-puppets, Richard Teschner (1879–1948) set new standards. Teschner, one of the most notable representatives of Viennese art nouveau, was a man of exceptionally diverse gifts: he was a painter, graphic designer, sculptor, puppeteer and much more. With his revolutionary theatre of figures, he created an integrated theatrical work of art encompassing everything from puppets to plays, stagecraft and incidental music. Using the Javanese rod-puppets as his model, he developed a new, expressive puppet variety for his pantomimic plays. Overcoming the traditional proscenium stage led to the unique round of the Figure Mirror, which gave rise to images of great beauty and suggestive effect.

Viennese puppeteer Klaus Behrendt (born in 1941) has spent years working on restoring the puppets and the theatre of Richard Teschner. The following pieces are performed based on original productions by Richard Teschner at the Theatermuseum: Die Lebensuhr, Karneval, Der Drachentöter, Der Basilisk und das Weihnachtsspiel.